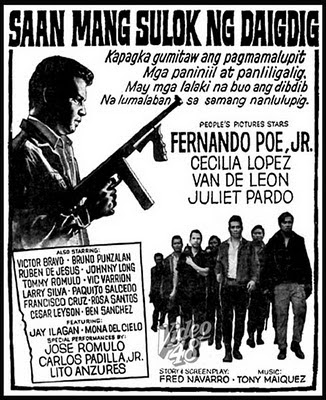 "Saan Mang Sulok ng Daigdig" (1964)- Stars Fernando Poe, Jr., Cecila Lopez, Van de Leon, Juliet Pardo, Jay Ilagan, Victor Bravo, Bruno Punzalan, Ruben de Jesus, Johnny Long, Tommy Romulo, Vic Varrion, Larry Silva, Paquito Salcedo, Francisco Cruz/ Special participation of Jose Romulo, Carlos Padilla, Jr., Lito Anzures/ Directed by Cirio H. Santiago
Saan Mang Sulok ng Daigdig tells of Marcos San Diego (Fernando Poe, Jr.), a mysterious young man and a former guerilla fighter, who along with his nine colleagues, fought the Japanese Imperial forces in the town of Masili during World War II. After the war, Marcos, the only survivor, returned in incognito, to witness the unveiling of a monument honoring the heroics of these gallant men. During his brief stay in the town, a group of notorious bandits (Van de Leon and company) came and terrorized the whole town. He encountered the group in some instances, bullying him and each time did nothing and just ignored them and remained mum and silent. He was branded a coward for not making a stand. Soon afterward, he rose to the occasion and as what he did during the war, he started annihilating the enemies one by one. 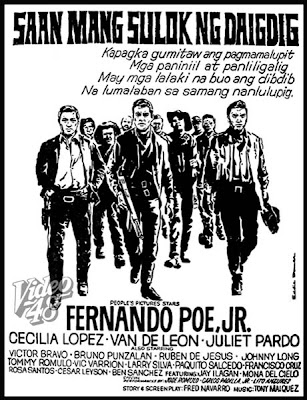 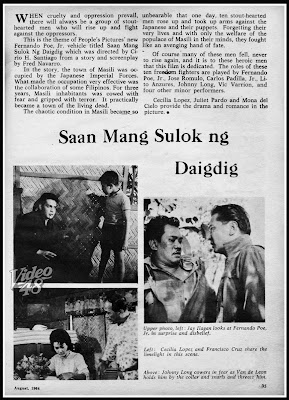