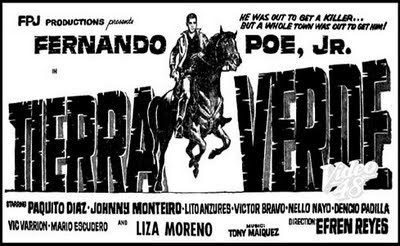 "He was out to get a killer... but a whole town was out to get him," says the blurb of the 1965 movie, "Tierra Verde." Fernando Poe Jr. starred as Narding, a bounty hunter, in search of a wanted man (played by Paquito Diaz). He reached the town of Tierra Verde where Diaz and his men were temporary holed up and being protected by the whole town. The movie reminds me of the young Steve McQueen in his highly popular 50s TV western show, "Wanted Dead of Alive."
Here's a short film clip of the movie showing the young FPJ in his western getup shooting it out with Diaz and his men.