MANILA, Philippines–The eighth death anniversary of the late actor Fernando Poe Jr. was marked Friday by the unveiling of a monument in his honor along Roxas Boulevard and a Mass that followed at his tomb at the Manila North Cemetery, where rivals for Manila mayor who have been taking swipes at each other–incumbent Alfredo Lim and deposed President Joseph Estrada–shook hands.

“My family is thankful to the City of Manila for concretizing the recognition to my father in such a big way,” Poe’s daughter, former MTRCB chair and senatorial candidate Grace Poe-Llamanzares, said at the unveiling and wreath-laying ceremony along Roxas Boulevard across the US Embassy.

She said “although we don’t know when justice will be served,” the monument was “a symbol of hope that the truth will eventually come out.”

FPJ’s family and supporters maintain that he was cheated of the presidency when he ran in 2004 and lost to Gloria Macapagal-Arroyo.

Grace said the 9-foot bronze statue was a reflection of her father, in real life, “matikas at matatag.”

The statue shows Poe, known as the action king of Philippine cinema, wearing a barong Tagalog and waving his right hand. Inscribed at the bottom are the words, “Tunay na Pangulo sa puso ng nakararaming Pilipino.”

“I wanted to capture a simple moment during his campaign for presidency,” said sculptor Jonas Roces, not related to Poe’s widow, actress Susan Roces.

Susan Roces also expressed her gratitude, saying it was only fitting to put up a monument to Poe in Manila because he grew up in the city.

“I got teary eyed when the monument was unveiled … People might be wondering why this was put up here. As a child, Ronnie (referring to Poe), his mother and siblings were here in this vicinity when Manila was being bombed,” she said.

Lim said he wanted to line that stretch of Roxas Boulevard with statues of former Presidents, where monuments to Corazon Aquino, Ramon Magsaysay and Manuel Roxas are already up.

Roces added that she was happy to sit between Lim and Estrada during the Mass at Manila North Cemetery.

“They were all smiles,” she said.

“I knew he (Estrada) was coming. We invited him. He’s still a friend. We’re both friends of FPJ,” Lim said.

Lim was talking to Roces when Estrada arrived and the mayor welcomed his former ally and shook his hands.

The two men also shook hands when it was time to say “Peace be with you.” 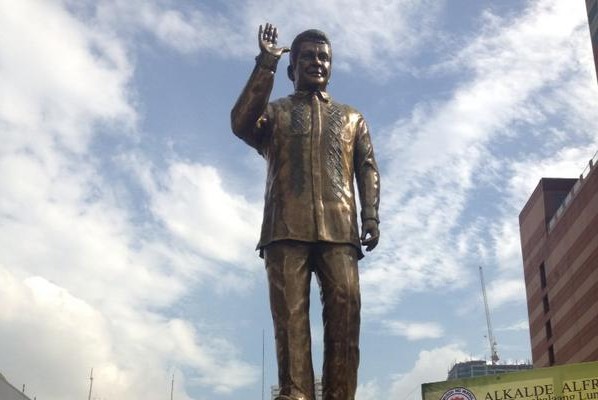 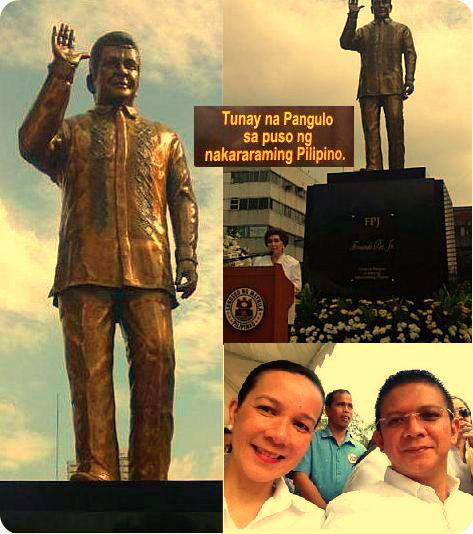