In 1962, a full page ad appeared in The Manila Times, then country's no. 1 broadsheet paper, announcing the opening day of FPJ Productions initial offering, "Batang Maynila." The movie had its theatrical run on May 1, 1962 at the Center Theater. This movie, awaited by milions of FPJ fans has yet to make its first TV appearance in Cinema FPJ, TFC or in Skycable Cinema One. We hope to see this great movie in the future. 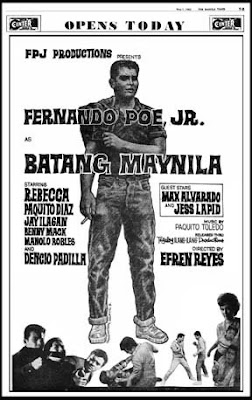