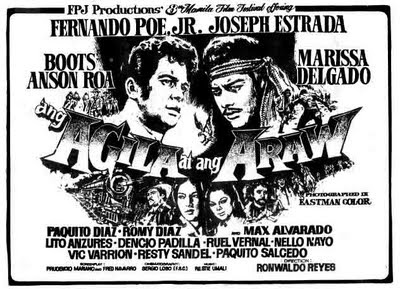 In 1973, Fernando Poe, Jr. and Joseph 'Erap' Estrada, teamed up for the nth time in the movie, "Ang Agila at ang Araw," FPJ Productions 8th Manila Film Festival offering. FPJ, who usually played the role of 'Agila' in most movies he appeared onscreen, portrayed here the role of Araw, a doctor who was wrongly accused of a crime, while Estrada was Agila, the dissident. Both were fugitives of the law. As they crossed paths, the two soon realized that they need each other to survive.