"When the popularity of the of the station's (GMA Channel 7) programs began to transcend social class and income bracket, the catchline Where You Belong was adopted to embrace its broadening audience. Ratings skyrocketed with FPJ sa GMA, a weekend revival of action movie star Fernando Poe, Jr.'s cache of almost 200 hit movies. With this program the station started to shed its elitist image."
Source: GMA Gold: 50 Years of Broadcast History 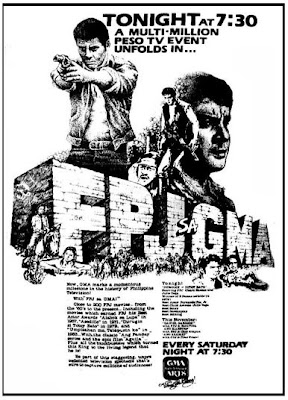 FPJ sa GMA, a weekly presentation of Box-Office King Fernando Poe, Jr.'s movies, ruled the ratings for as long as it aired. Without question, FPJ reigned as local TV royalty. FPJ still reigned in 2008 with Cinema FPJ:Da King on ABS-CBN. 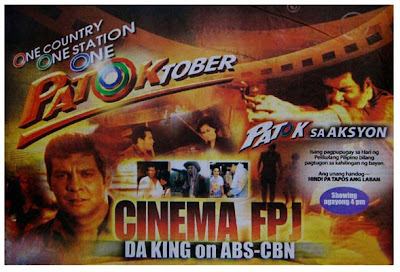 Esteban is available on pay per view online thru TFC Now. Only $1.99. Here's the link:

Simon, I think you have seen our idol many times and also got the privileged to experience talking with him side by side. Can you share with us about your personal account being with our idol FPJ? please...

Hi Roland! Just a brief encounter and short chat with Da King. I only met him thrice. I think you already read it--- posted in my other blog (video 48 blog).
Thanks!

Hi Basag! "Lo' Waist Gang at si Og sa Mindoro," according to our friend, Roland, was already out in the market, though I haven't seen a copy yet.

Also, I don't have a copy of Pepeng Kaliwete, Agila at ang Falcon, Alakdang Gubat, Dugo ng Bayan, Sto. Cristo and Esteben. Are these movies taped from TFC or from beta/vhs tape sources. But I preferred more of the old vintage FPJ movies, in the 50s and 60s, something like Markado.
Thanks!

Thanks for your reply about our idol. Siguro naging memorable lahat sa yo yung close encounter mo with idol fpj... Ako, I met him only once and I really thank God for that. Dream ko kasi yun na nagkatotoo. Very approachable and talagang mahal nya ang masang pilipino.

Basag, I was able to tape only the last 3/4 of Prinsesa Naranja. Di ko inabutan ang umpisa. May tumawag lang sa akin kaya ko nalaman. If you like, kahit na incomplete, sabihin mo lang. Also, wala akong Lakay at Gawa na ang Bala Papatay sa Iyo. Send me your email address so I can send you the list of FPJ titles i have.

Will PM you from now on. thanks.

simon,
i hope you can also find a copy of the 50's costume film by fpj...i remember it as a kid then...ala-man in the iron mask un...i dont have an idea about the title...another film fpj did in his youth is student canteen. batang bata pa siya nun.