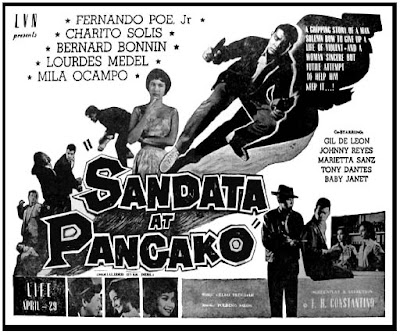 In the fifties and early sixties, Sampaguita, LVN and Premiere Productions were the three leading movie production outfits. The so-called studio system existed that time wherein these movie companies maintained their own stable of contract stars, directors, writers, technicians and crews. There were other small movie outfits, like Lebran, Royal, Everlasting, Magna-East, Larry Santiago, People’s Pictures, Tagalog-Ilang-Ilang, Tamaraw, among others.
Fernando Poe, Jr., a contract star of Premiere Productions, bolted out of his mother studio when his request for a talent fee increase was rejected. He was jobless for six months until a juicy offer (twice his old rate) from Magna-East Productions came. He made Markado (1960), a blockbuster that year. It was FPJ who broke the studio system and the standard talent rate of contract movie stars.
As a freelancer, he made Sandata at Pangako in 1961, the one and only movie he did with LVN Pictures. It was also the only movie he appeared and starred with 60s action star Bernard ‘Palos’ Bonnin. 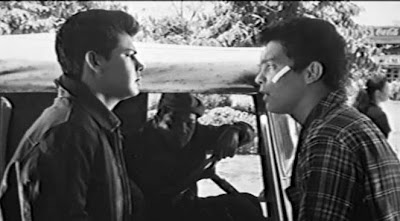 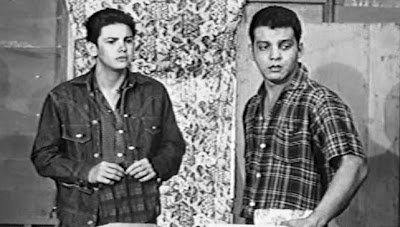 Unfortunately I won't be able to watch this movie because of my work schedule. I just rely on you Simon... I saw this at kabayancentral.com but it's not available for sale here. Hope to have this movie... Btw, meron ka na bang Alupihang Dagat? Maraming Salamat nga pala sa gift mo.