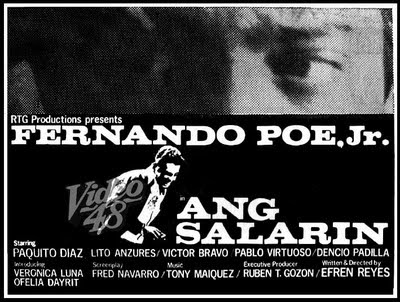 Fernando Poe, Jr. starred as Alberto, a man unjustly and falsely accused of a crime. He was arrested and convicted. He escaped and did everything to get the culprits and clear his name.

One scene I vividly remembered was the ringside brawl, where FPJ in a ala-Pacquiao stance easily disposed his foes.

Where can I order a copy of Ang Salarin in dvd? Pls email to me on gomvic@aol.com