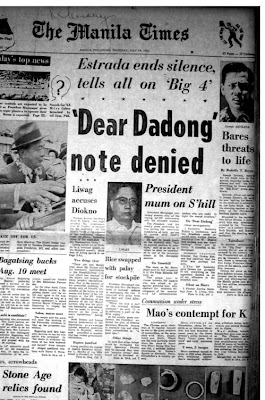 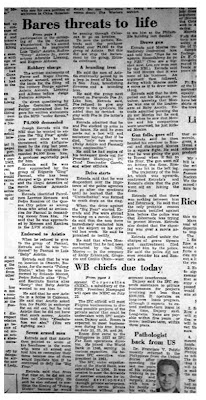 In mid 1963, Fernando Poe, Jr., together with fellow star, Joseph Estrada, stood up and exposed the dreaded "Big 4" syndicate, a crime group that extort money from movie stars and threatened them with disfigurement. It was reported that both Poe and Estrada stocked up arms when they refused to give any money to the syndicate. Here's the full story, from the front page of The Manila Times.

Joseph Estrada, known for his tough roles in the movies, yesterday broke his silence and told the NBI everything he knows about the “Big Four” crime syndicate. Estrada, whose real name is Joseph Ejercito, 25, said he was “spilling the beans” on the syndicate to straighten the facts which led to the shooting incident at the lobby of the Phil-Am Life Building Sunday night. Wounded in the incident was Oscar Roncal, a movie actor who was previously arrested by the “Untouchables” on a robbery charge. Both Estrada and Roncal said that the shooting was accidental.

Estrada told the NBI that he wanted to expose the “Big Four” syndicate ever since he was threatened with disfigurement by the ring last year. He said the syndicate demanded php4,000 from him. A producer reportedly paid for him. He said he was first approached by the group of Edgardo ‘Ging’ Pascual, who has been charged with grave threats and illegal detention of movie director Armando Garces. Estrada identified Patrolman Lorenzo Meneses and Pedro Ramirez of the Quezon City Police as emissaries for Pascual in demanding money from him. He said that he was approached by Meneses and Pascual in the LVN studio.

When he refused to give to the group of Pascual, Estrada said he was “endorsed” by Pascual to Luis ‘Baby’ Asistio. Estrada said that he was on location on Obando, Bulacan, for the movie “Pulong Diablo,” when he was informed by Rolando Montes, Pedro Rebullo alias ‘Pita,’ and Restituto Santos alias ‘Resty, that Baby Asistio wanted to see him. He said that he saw Asistio in a house in Caloocan. He said that Asistio asked for php4,000 in exchange for an old car, but he told Asistio that he did not have that much money. Asistio then told him: “Kinakalaban mo ako.” (You are fighting me). Estrada said that Asistio then pointed to seven of his henchmen in the room who were all armed and told him to remember their faces because one of them would liquidate him if he continued to defy the “Big Four.”

Estrada said that from that time on he did not set foot in Caloocan City. He said he also refused to continue the filming of “Pulong Diablo” because he would be passing through Caloocan to go on location. To save the picture, Estrada said the producer forked over php4,000 to the group of Asistio. But this did not stop the harassment by the group, Estrada continued.

He said the men of Asistio continually passed by in a jeep in front of his house in San Juan, brandishing firearms and a branding iron. He said the group next turned on Fernando Poe, Jr. like him, Estrada said, Poe refused to give any money to the syndicate. He added that he decided to stay with Poe in the latter’s house. Estrada admitted that he and Poe stocked up arms in the house. He said he even made out a last will and testament saying that if he died, “only two persons (Baby Asistio and Pascual) were responsible. He said he had copies of his testament made out for President Macapagal, PC Chief Dominador Garcia, and other officials.

Estrada said that he was despondent over the impotence of the police agencies to go after the syndicate until he learned that the “Untouchables” was formed to crack down the ring. When the drive against the “Big Four” started, Estrada and Poe were abroad working on a movie. Estrada said that the task force immediately contacted him at the airport on his arrival last week. He said he promised to testify. He said that when Montes learned that he had been contacted by the NBI, Montes --- in the company of Zaldy Zshornack, Gregorio and Cecilio Chico --- went to see him at the Phil-Am Life building last Sunday.

Estrada said Montes immediately confronted him and told him: “Siga ka na ngayon. Sinasalubong ka pa ng NBI.” (You are a big shot now. You are even met by the NBI}.Estrada said he told Montes that it was none of his business. An argument then followed, during which Montes made a move as if to draw something. Estrada said that he then pulled out his Magnum revolver, knowing that Montes was one of the lieutenants of Baby Asistio. Estrada admitted pointing the gun at Montes but he said that when he saw that Montes and his companions were unarmed, he just kicked Montes.

Estrada said he then handed his revolver to Roncal and challenged Montes to a square fight. He said that he was giving the gun to Roncal when it fell to the floor. The gun went off on hitting the floor. Roncal was hit in the left leg. The trajectory of the bullet, which was upward, confirmed Estrada and Roncal’s claim that the gun went off on hitting the floor. Estrada said that there was nothing between him and Zaldy Zshornack. He said that the only probable reason Zshornack testified against him before the police was that Zshornack was trying to protect Montes. Estrada also denied that the shooting was over a movie actress. Estrada called unfair the charges of grave threats and maltreatment filed against him by the police. He said the police did not even consider his and Roncal’s side. 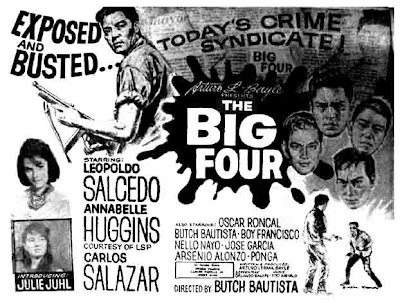 hi! im essie of tv5. we are featuring fpj, erap (the big four syndicate)in pur show. i just want to ask your permission sana to use your materials. this will be aired on march 17, 2013. please allow us... thank u!

Has somebody has the info of the fateful death of Oscar Roncal in Pampanga.

may ask permission to share your article to my fb groups.. thanks