LO' WAIST GANG: THE BARKADA YOUTH OF THE 50s 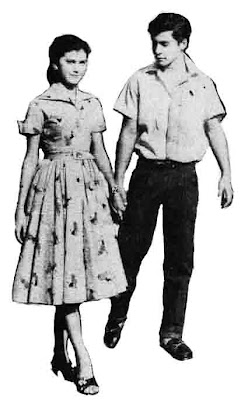 Fernando Poe, Jr. was barely 17 years old when he starred in the first of a series of highly successful “Lo’ Waist Gang” in July 1956. It jumpstarted his career after a below par showing of his first movie, “Anak ni Palaris” in 1955.

The public tended to see Lo-Waist Gang as a real-life gang that Ronnie, like any other members of the gang, often found themselves provoked and set upon by kanto boys wanting to test them out. Actually, says Ronnie, Lo’ Waist was a gang only onscreen; Zaldy Zshornack had his own barkada, and so did Boy Sta. Romana; and the only members that Ronnie moved around with after working hours were Berting Labra (because Labra worked for Poe senior) and Boy Francisco (because Boy and Ronnie were both courting Corazon Rivas at that time). “I didn’t become really close to Zaldy until after Lo’ Waist,” says Ronnie.

Lo’ Waist Gang was the big break, but Ronnie’s smile is rather sad as he reels off the once- famous gang’s names: Zaldy, Labra, Sta. Romana, Bobby Gonzales, Tony Cruz, Mario Antonio, Butch Bautista, Boy Francisco…”Let me see, have I forgotten anybody?” And melancholy does resound in the litany as one thinks of Boy Sta. Romana, violently dead; or of Zaldy, who soared and slipped and came back; or of the others for the moment of glory was as brief as youth, though the ‘50s are forever young in their faces.

For Lo’ Waist not only summed up a generation, the barkada youth of the 1950s; it was also a landmark in Philippine movies, as may be seen in Ronnie’s transformation. From the escapist unreality of the costume pictures he had been doing, he shifted, in Lo’ Waist, along with the Philippine cinema, to the contemporary world and became topical, wearing the look of the ‘50s, speaking the idiom of the ‘50s. It was the Santiagos who made Philippine cinema of our times.

Lo’ Waist Gang was such a huge box-office success and prompted the production of sequels all totaling 8 more (from 1956 t0 1960).It also started a fashion fad then: low-waist pants. 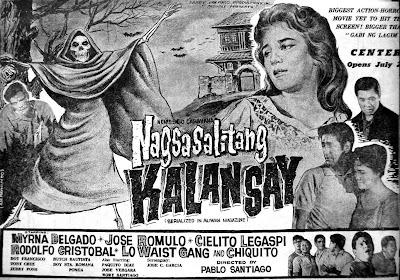 thank you for sharing pics of lo waist gang movies. grew-up with this movies. wondering if you know where to find a dvd copy of these movies.

it was only when I was brought back to manila when I learned about the low waist gang.they are not known in the province.that was in the early 70's

it was only when I was brought back to manila when I learned about the low waist gang.they are not known in the province.that was in the early 70's