INQUIRER'S 2004 FILIPINO OF THE YEAR 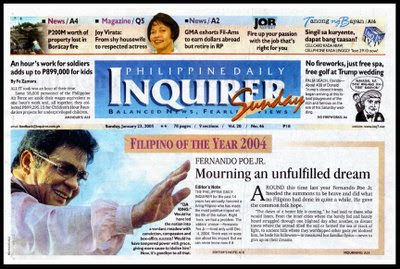 In 2005, the country's top broadsheet newspaper, Philippine Daily Inquirer named Fernando Poe, Jr. the 2004 Filipino of the Year. Here's this news article titled "Mourning an Unfulfilled Dream" and what the paper have to say of the late actor. Part of the article is reprinted below. Click the images to read the text in full.

---Around this time last year Fernando Poe, Jr. heeded the summons to be brave and did what no Filipino had done in quite a while. He gave the common folk hope. “The dawn of a better life is coming,” he had said to those who would listen. From the inner cities where the barely fed and barely heard struggled through one blighted day after another, to distant towns where the unread tilled the soil or farmed the sea at crack of light, to ancient hills where they worshipped other gods yet idolized him, he bade his followers--- in measured but familiar lyrics--- never to give up on their dreams...Could FPJ have shepherded this desolate nation to a more verdant meadow? Would he have led the way had he lived, with conviction, compassion, decency and box office success? Would he have tempered power with grace? Would he have given us more cause to idolize him? Ever a fighter, he did not turn his back one one more fight. As it turned out, the presidential run was his best and last. On Dec. 14, 2004, he breathed his last, leaving behind Susan Roces, his wife of 36 years, and a movie industry that had never felt more orphaned.His death left a sadness with no name. At his wake, all kinds of people grieved and queued to pay their last respect. “They came to mourn some of the best of what it meant to be Filipino,” wrote Conrado de Quiros in his column. They also came to mourn an unrealized dream, both his and theirs. 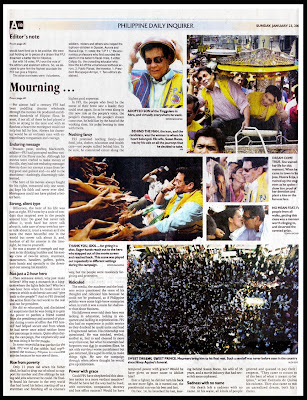