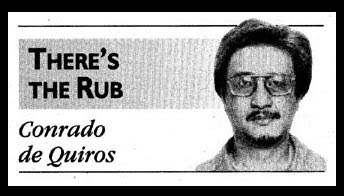 One, after Fernando Poe, Jr. died on Dec. 14, 2004, they did an inventory of his things. In one bodega, they found cartons of relief goods that were meant to be delivered to Infanta, Quezon. Infanta had been buried in mudslides a couple of weeks before his death and, along with many others, FPJ had bestirred himself to help.

With one difference: While all the other relief-givers were busy putting their names on their donations— or as in the case of many public officials, putting their names on other people’s donations— FPJ was not. His people would swear later he would not hear of it. He gave strict orders for the relief goods to be unmarked and just sent where needed. It altered my view of the man completely and made me vow to make amends to his family for some of the things I had said about him.

That is class. Which makes me furious today about the politicians who want to exploit the misfortune of others for their ends. Or indeed their continuing travail, many of them having lost everything in one of the worst disasters ever to hit this metropolis. It’s a sentiment I know is shared by many, even those who were not directly ravaged by the floods, as I’ve seen in news reports and blogs.

Heading the pack is Willie Revillame who was busy announcing that “kami nga ni Senator Villar” have been tireless in delivering relief goods to the needy. You’d think the guy would have learned a thing or two from being crucified after he vituperated about Cory’s coffin being shown on his show, consequently disrupting his and his audience’s fun. Clearly his chastisement hasn’t chastened him enough. Or he’s just fundamentally tasteless he cannot see that the last thing the victims want is to be treated like contestants, or supplicants, of “Wowowee” waiting upon his generosity.

Thankfully the tack is likely to backfire. People are in a foul mood and are not likely to remember Revillame—or his principal—with fondness come election time.

The last thing we need is to see politics mix with relief. “When you want to shoot, shoot,” as Eli Wallach said in “The Good, the Bad and the Ugly,” finishing off the guy who was threatening him with all sorts of mayhem. Same principle here: When you want to give, give, don’t advertise. All you’ll get back is mayhem in the minds of the beneficiaries.

The Internet is full of reports that the emergency fund is depleted, having gone to fund Arroyo and company’s not-very-emergency trips abroad. I’ll leave that for when it’s confirmed. But the breakdown of government is staggering. Arroyo should thank God, or whatever entity she worships, we have elections—the same elections she tried to monkey with earlier with Charter change. Without that she would probably not last this week, given an incensed citizenry, given an aroused citizenry, given a citizenry that will no longer brook abuse. This is as angry as I’ve seen residents of Metro Manila in a long time.

Three, indeed to this hour, what government we have is courtesy of the private sector where voluntarism has sprung like wildflowers. That is the bright spot in all this, the light amid the darkness, the blazing sun after the storm. Truly the Filipino rises to his finest self during trying times, the more trying the times, the finer the rising. Or it is in times of disaster that the Filipino ceases to be a disaster, thinking of others first before self.

Makes you wonder what on earth you need government for.

I believe that FPJ would have been a good President, even better!

When the situation gets very tough like the one we're facing now, there is one FPJ that you can always count/rely on. He is indeed so rare. Very rare! The kind of generosity he had shown to us is something that everyone should emulate. Generosity that is very real and sacred. That's one of the many attribute of FPJ that I really missed so much and that what makes him apart or different from the rest.. I missed my idol fpj every single day of my life but he's just here in my heart serving as an inspiration to me...